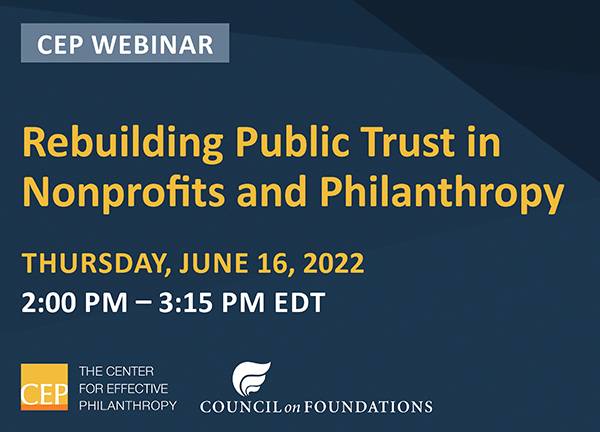 Recent data and research reveal that public trust in nonprofits and philanthropy has declined. Whether due to diminished trust in institutions, perceptions of politicization, increased societal polarization, or long running critiques of philanthropy as a “ruse,” this decline in trust, accompanied by lower giving rates, represents a challenge and opportunity for philanthropy and nonprofits.

Join the Center for Effective Philanthropy (CEP) and the Council on Foundations on June 16th from 2-3:15pm EDT for a discussion about rebuilding trust in nonprofits and philanthropy.

Moderated by CEP President Phil Buchanan, the panel will include:

MacKenzie Scott’s approach to giving has sparked speculation and discussion in philanthropy as well as in the wider world. Her large, unrestricted gifts, accompanied by few reporting requirements, present a unique opportunity to understand how big gifts impact nonprofits.

With this in mind, CEP is undertaking a three-year research project to better understand:

Find out more about the study, its objectives, timeline, and our advisory group, here.

If you are interested in funding this research, please reach out to Sarah Martin at sarahm@cep.org.

Latest on the CEP Blog

Two Years Later: Reflections from Phil Buchanan
In a series of three posts on the CEP blog, President Phil Buchanan shares his observations about what has changed in the two years since the start of the COVID-19 pandemic. Specifically, he discusses:

Finally, Don’t Miss This Post
Writing in from the International Journalism Festival in Perugia, Italy, Media Impact Funders Executive Director Vince Stehle makes an impassioned case for philanthropy to support independent journalism not only in Ukraine at this moment, but in conflict zones around the world. Read it here.

CEP will be launching a search for a new vice president of research in the coming weeks as Ellie Buteau, PhD, transitions to a new role at the organization. Buteau — who has served in various capacities at CEP since 2004 and has been vice president of research since 2009 — has asked to step into a new part-time role for personal reasons related to her family. She will continue to lead CEP’s recently announced three-year research study on the effects of large, unrestricted gifts on nonprofits.

“It is difficult to overstate Ellie’s contributions to CEP during the history of our organization and especially the period she has led our research efforts,” said CEP’s president, Phil Buchanan. “Furthermore, Ellie has been a cultural leader, a mentor to many, and a key advisor to me on many broad, strategic questions facing CEP. I cannot thank her enough for all she’s done and I am thrilled that she is not going anywhere.”

During her tenure, CEP has produced more than 30 research reports, most of which Buteau has lead-authored. Her analyses have led to new insights about, among other things: what drives staff satisfaction at foundations; what predicts donor satisfaction for community foundations and how it is linked to a propensity to give more; how foundation leaders’ attitudes have shifted with respect to the provision of different types of support; what nonprofits are seeking from individual donors; the keys to strong relationships between program officers and nonprofits; and how foundations have responded to the crises of 2020 – and the degree to which attention to racial equity both has and has not been manifested in those efforts.

CEP has retained Paul Spivey of Phillips Oppenheim to conduct the search for a new vice president of research, which will begin in the coming weeks.

We’ve recently opened up exciting new positions we’d like to spotlight. Please share these widely with your networks:

Philanthropy WV 2022 Annual Conference, May 18-20 – CEP President Phil Buchanan will be giving a keynote and leading a track at the conference, the theme of which is “Cultivating Abundance & Growing Opportunity.” Register here.

Interested in booking a CEP staff member to speak at your next event? Staff at CEP are available to speak on a variety of topics such as current giving trends, effective giving, and the role of America’s nonprofit sector in a moment when a strong sector is needed more than ever. Find out more here, or reach out to Grace Nicolette at gracen@cep.org.