The nonprofit perspective matters in any discussion about the philanthropic sector. But the views of nonprofit leaders are too often left out. CEP’s newest research seeks to remedy that when it comes to several hotly debated issues of the moment in philanthropy.

In The Funding Landscape: Nonprofit Perspectives on Current Issues in Philanthropy, released just this week, CEP’s Ellie Buteau, Hannah Martin, and Kate Gehling highlight the nonprofit perspective on the impact of recent tax code changes, anticipated changes in nonprofit revenue, concerns about a recession, current debates about donor-advised funds (DAFs), and the prevalence and use of gift acceptance policies.

Our survey revealed a number of important findings. For example, we learned that nearly two-thirds (64 percent) of nonprofit CEOs say a recession would increase the need or demand for their organization’s programs or services, but only one-third (33 percent) have a plan for how they would handle a recession. We also learned that nonprofit CEOs identify both advantages and disadvantages of DAFS, with the top advantage cited being that DAFs involve less of an administrative burden for nonprofits, and the top disadvantage cited being that DAFs hamper nonprofits’ ability to build personal relationships with donors. 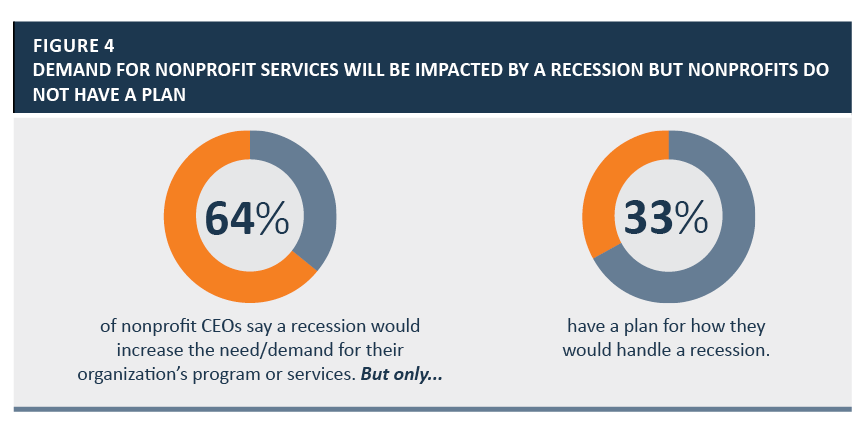 These are just a few of the data points shared in The Funding Landscape. Findings in the report are based on responses from 419 CEOs from nonprofit, grant-seeking organizations that receive at least one grant from foundations giving $5 million or more annually. (The survey was sent in November 2019 to 1,125 CEOs on CEP’s Grantee Voice panel, for a 34 percent response rate.)

CEP provided this data to The Chronicle of Philanthropy in December and The Chronicle has mentioned several data points in articles over recent weeks. Martin also shared more detailed data from the study about nonprofit perspectives on DAFs in a recent post on the CEP blog. This report is a complete summary of what we found in our survey.

We invite you to download and read the publication in full, and we welcome your thoughts and reactions.

How Funders Can Get Better at Getting Better

When CEP looked at grantee feedback gathered over the past 15 years through the Grantee Perception Report (GPR), we learned that one group of funders is making consistent improvements over time: those who survey their grantees repeatedly.

This story is told in a recent article in Washington Monthly by Lowell Weiss, president of Cascade Philanthropy Advisors. In the article, Weiss looks at the work of three foundations that have used the GPR multiple times and seen their ratings trend upward: Blandin Foundation, Conrad N. Hilton Foundation, and Maine Health Access Foundation.

While CEP’s analysis could not prove a causal link between surveying grantees repeatedly and making improvements, the data shows a strong and clear association between more positive grantee experiences and funders that receive regular feedback from their grantees.

As Weiss writes, “There’s no question that the foundations that invest in listening to those who are closest to the problems they seek to solve — their grantees, their constituents, and other key stakeholders — are the ones most likely to learn, adapt, and improve over time.” CEP President Phil Buchanan will be speaking in San Francisco on Wednesday, March 18 at 7:30 PM as part of the DiaTribe Foundation’s free CPS Lectures Series. In his talk, Buchanan will discuss some of the key arguments of his book, Giving Done Right, and why they matter in particular in this moment of political volatility, declining trust in institutions, and backlash against so-called “elite philanthropy.”

If you’re based in the Bay Area, we hope you’ll join us next month for this free event!

Anthony Richardson Elected to CEP Board of Directors CEP is thrilled to welcome Nord Family Foundation Executive Director Anthony (Tony) Richardson aboard as the newest member of its Board of Directors.

Richardson is an Ohio native with a decade of public service experience. In 2011, he was elected as a councilman at-large in the City of Lorain, Ohio, becoming the youngest person of color elected to an at-large seat. During his second term, he served as chairman of the Police, Fire, and Legislative Standing Committee and sponsored legislation to increase hiring goal percentages for racial minorities and women on city projects. Richardson joined the Nord Family Foundation, located in Amherst, Ohio, in January 2015 as a program officer, and was named executive director of the Foundation in November 2018.

“Tony Richardson is a foundation leader who exemplifies principles of effective philanthropy that CEP promotes,” said CEP President Phil Buchanan in a press release. “He seeks to listen and learn from both grantees and those they serve, and to chart a path for the Nord Family Foundation that is informed by these insights. He has been a champion of our YouthTruth initiative and a committed member of CEP’s Advisory Board. I am thrilled he is now joining our Board of Directors.”

Save the date for the 2021 CEP Conference!

It’s never too early to make sure you’ll be able to take part in CEP’s next biennial national conference! We hope you’ll save the date for the 2021 CEP Conference in your calendar: May 11-13, 2021 at the Marriott Marquis Houston. Stay tuned for initial details and registration information later this year.

Reserve your spot now to participate in a CEP assessment this year!

If you’re thinking about learning from candid, actionable feedback from your grantees, staff, donors, or other stakeholders this year, act quickly to reserve your spot for a CEP assessment in 2020. If your foundation is interested in collecting and learning from feedback this year, now is the time to contact Austin Long to get the conversation started.

Book a CEP leader to speak to your audience!

CEP’s experts have deep experience working closely with philanthropic funders and are passionate about sharing their views on the unique and important work of the sector. Learn more about CEP’s leaders here and reach out to Vice President, Programming and External Relations, Grace Nicolette if you have questions about booking a CEP speaker.

Ruth Levine, policy fellow at the Center for Advanced Study in the Behavioral Sciences at Stanford University, presents five key questions for international grantmakers to help them develop stronger relationships between themselves, the international NGOs they support, and the local organizations with which those INGOs often partner.

Manager, Assessment and Advisory Services, Charlotte Brugman, who is based in Amsterdam and leads CEP’s work in Europe, writes that listening and learning on its own is not enough, and that foundations cannot afford to navel gaze and tinker with finding the perfect strategy given the pressing nature of the problems they seek to solve.

Barbara Leonard, president and CEO of the Maine Health Access Foundation (MeHAF), tells the story of how MeHAF has used the Grantee Perception Report (GPR) regularly to gain insight into the crucial but difficult-to-answer question: how are we doing?

“Which Side Are You On?”, an essay by Heinz Endowments President and CEP Board Chair Grant Oliphant, argues that reforming the criminal justice system will first and most fundamentally require a change of mind and a change of heart.

In his “Looking Back, Looking Forward” series, CEP President Phil Buchanan reflects on philanthropy’s first two decades in the 21st Century and shares his hopes for the new one now underway.

Andrea Fionda, director of programs at the Jacob & Valeria Langeloth Foundation, discusses how the Foundation has made intentional shifts in its grantmaking to be consistent with its principle of “following the field.”

Miles Wilson, deputy director of education grantmaking at Ascendium Education Group, has shared the first two posts in new five-part series on where philanthropy is stuck in old paradigms — and where there lie opportunities to advance social justice both within the sector and across American society. The first post shares Wilson’s story and experience working in the field, while the second keys in on the vital role that general operating support can play in advancing social justice.