The Reverse Site Visit: A Day in the Life of Our Program Officer

Thanks to Lindsay Louie’s generous invitation, I had the opportunity to do a reverse site visit at the William and Flora Hewlett Foundation in October (disclaimer: Hewlett is a leading grant funder of CEP). For a day and a half, I shadowed Lindsay to better understand how the Hewlett Foundation works and, specifically, how she approaches her role as a program officer in the Effective Philanthropy Group.

On giant sticky notes, Lindsay took the time to explain in detail how the foundation sets its strategies and goals, and how those play out in the group’s grantmaking approach. I sat in on calls and meetings. I even got to click the button to approve a grant! 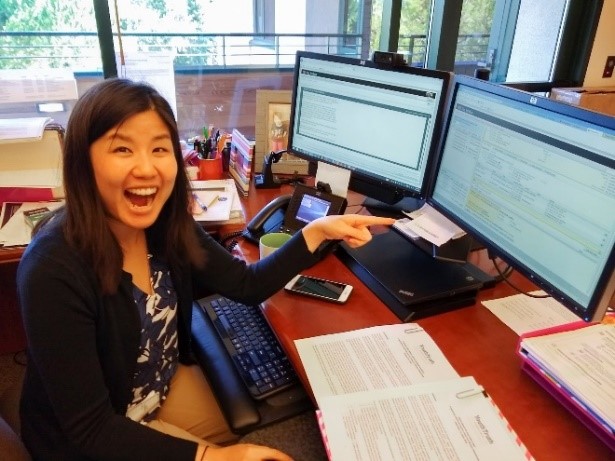 Shadowing Lindsay and spending time with her colleagues gave me an inside look into the realities of working at a foundation. It fleshed out what I knew from research about foundations, providing me a more nuanced perspective of the constraints and tradeoffs that a program officer might face in a given day. In particular, I gained a better understanding of how a program officer approaches three key questions:

As Lindsay and I entered the foundation’s parking lot in the morning, she took a moment for her daily meditation. She starts each morning by reminding herself, “You’re so lucky you get to do this. Use your time well.” Then, the day officially started — and didn’t slow down! Lindsay’s inbox, in particular, filled up quickly. She showed me eight emails representative of her daily mail — six of which were from grantees — and described how she prioritized responding to each. CEP’s 2017 study benchmarking program officer roles and responsibilities shows that a majority of program officers believe developing and maintaining relationships should take up the greatest amount of their time in order for them to be most effective in their role, while only 36 percent of program officers say it currently does take up that time. So email-wise, Lindsay is living the dream!

Despite her best efforts to get through her to-dos, when the end of the day rolled around there were still unread messages, unmade decisions, undone work. When we left the office, I asked if she meditated upon anything when leaving. “No, my mind is swimming with all the things I didn’t get to finish at work and what my family needs from me when I go home,” she said.

Seeing firsthand the demands Lindsay faces in her day-to-day work made me realize that it’s important, as a grantee, to remember that program officers have demanding jobs and competing priorities, too. Being understanding about limits goes both ways in the program officer-grantee relationship. While there are many valuable things a program officer can choose to do in a day — for example, being responsive to every grantee request or getting through their to-do list — they have limited time and must prioritize.

2. What do I fund, and what type of support do I provide? Lindsay took the time to explain to me how she thinks about what organizations or programs to fund, and what type of support to provide to those grantees. When program officers decide which nonprofits to fund, they typically weigh the tradeoffs between providing fewer nonprofits with larger grants or providing more nonprofits with smaller grants. Lindsay does a mix of both, balancing: 1) continuity within an established portfolio of organizations with which Hewlett is highly aligned and partnering for the long haul; and 2) reserving some resources to fund newer grantees, making room for more diverse organizations that are more recent entrants to the field of generating knowledge about philanthropy. Intentionally supporting a core group of grantees while maintaining the flexibility to be responsive to new or urgent opportunities means making difficult choices about how to allocate the Effective Philanthropy Group’s grantmaking budget.

Program officers also need to make important decisions about what type of support to provide a grantee. While CEP’s 2018 research shows that grantees believe general operating support has the most impact on strengthening their organizations, Lindsay offered her perspective on why some foundations might choose to provide project support instead. She explained that general operating support grants make most sense for grantees with missions and goals that largely overlap with the foundation’s. In contrast, for grantees that have less overlap (e.g., maybe only one of their programs or projects intersects with the foundation’s interests), project support may be appropriate. Hearing this nuanced perspective — especially from Lindsay, who has long been a champion and provider of flexible support — was illuminating.

During my visit, Lindsay took a call with a nonprofit leader who wanted to discuss the nonprofit’s work, learn more about the Effective Philanthropy Group’s giving priorities, and explore whether funding might be a possibility. When it became clear to Lindsay that there wasn’t a funding fit, she said no quickly and clearly — while impressively maintaining a posture of understanding and helpfulness. She suggested other funders and programs that might fit better and offered to make introductions. The nonprofit leader seemed to leave the conversation with clarity about the likelihood of funding, and hopefully felt heard and helped.

Listening to Lindsay handle such a difficult conversation made me realize that saying no well requires a high level of finesse and skill. It made me wonder if it should be a central part of what foundations look for when hiring a program officer!

Prior to the visit, I already felt honored to have the chance to shadow Lindsay. Afterwards, I had an even greater appreciation for her invitation to do a reverse site visit. I came away with a greater understanding of how program officers have much to do in a limited time, have difficult decisions to make regarding what to fund and how to do it, and often need to say “no” — which, to do it well, is no easy task. I am so grateful to Lindsay, and the rest of the Effective Philanthropy Group at Hewlett, for creating the space and time to host me for a day and a half last fall!