Foundations Respond to Crisis: A Must-Read Research Series from CEP 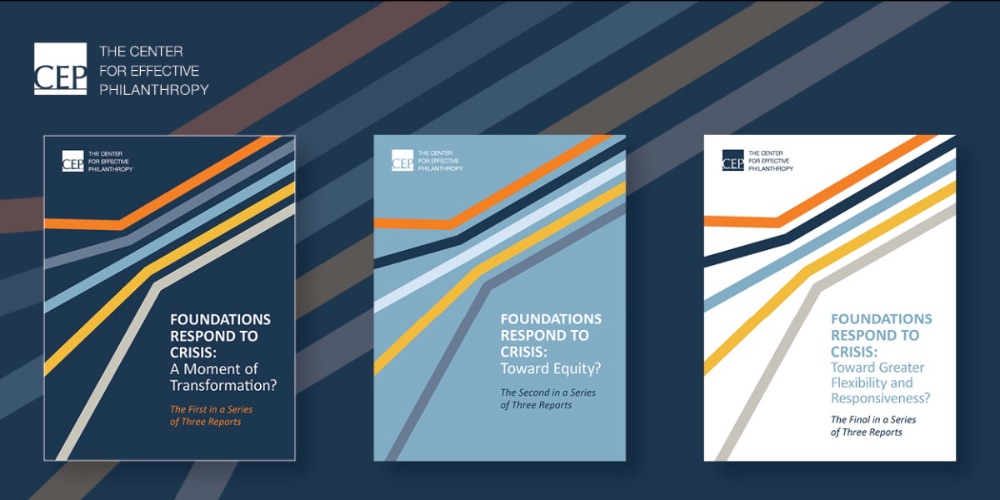 In early spring, as the COVID-19 pandemic worsened, foundations in the U.S. began to shift resources and practices. Some funders, nonprofits, and others in the field called for fundamental changes in how funders approach their work — including upping the provision of long-term, flexible funding; shifting the funder–grantee power dynamic; placing greater trust in nonprofits; and increasing foundation payout.

The pandemic has exacerbated long-standing structural inequities — especially in Black, Latino, Native American, low-income and working-class communities, and for people with disabilities. As such, foundations have also been called on to invest in communities hit hardest by the public health and economic consequences of the pandemic, and to integrate racial equity more comprehensively into their work.

Given these calls, what’s actually changing in foundations’ practices? And what does this mean for the future?
CEP explored these questions through surveying and interviewing U.S. foundation leaders. Foundations Respond to Crisis, a new three-part research series from CEP, shares what was learned.

A Moment of Transformation?
The crises of 2020 have catalyzed foundation leaders to reconsider their choices about how they conduct their work, the first report in the series finds. They hope foundations will continue to build on the changes they are making rather than return to ways of the past. CEP Director, Research, Naomi Orensten discusses the key findings here.

Toward Equity?
The second report finds that almost all foundations report placing new, or more, focus on supporting Black, Latino, and lower-income communities. Most foundation leaders also say they are reckoning with racism and paying greater attention to racial equity in their work, but significant opportunities for further progress remain, and time will tell how deep or sustained this new focus will be. CEP Vice President, Research, Ellie Buteau, discusses the key findings here.

Toward Greater Flexibility and Responsiveness?
As the third report finds, foundations are changing to be more flexible and responsive in light of 2020’s events. They are loosening grant restrictions, providing more unrestricted funding, and reducing what they ask of grantees. Many plan to continue these practices in the future, though to a lesser degree than during their pandemic response. Orensten discusses the key findings here.

Findings in this research are based on survey data gathered from 236 foundations — 170 of which signed the pledge hosted by the Council on Foundations to act urgently in response to COVID-19, and 66 of which had not — as well as in-depth interviews with leaders of 41 foundations that signed the pledge. (All data was collected between June and August 2020.) 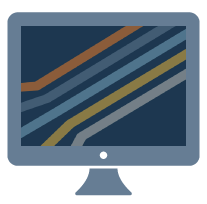 Join us on January 12, 2021 for an interactive webinar discussion that will delve into this research and address how foundations are responding to our compounded crises. Following a presentation of the data by CEP’s research team, Chris Cardona (program officer, philanthropy, at the Ford Foundation), Nora Moreno Cargie (president of Tufts Health Plan Foundation), and Marcella Tillett (vice president of programs & partnerships at the Brooklyn Community Foundation) will share their insights about what this moment means for the work of their foundations and, looking ahead, what these crises mean for foundation philanthropy as a whole.

Several foundation leaders have shared their thoughts on this research on the CEP blog.

Tune in to CEP’s 20th Anniversary Virtual Learning Sessions in 2021! 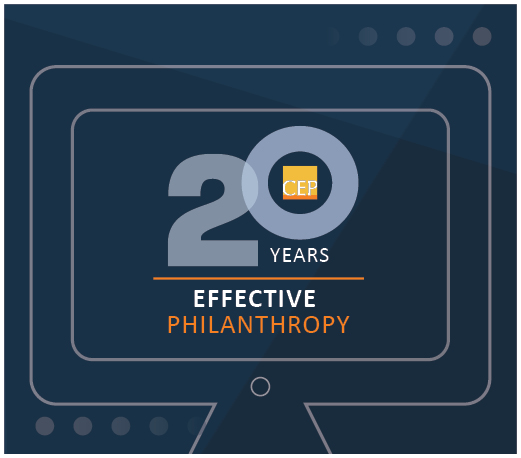 Like so many other organizations, we were saddened to have to cancel CEP’s national conference in 2021. Every alternate year, we look forward to bringing together leaders from throughout philanthropy at our conferences to connect, learn, and hear from inspiring and thought-provoking speakers — and we were especially looking forward to coming together next year in CEP’s 20th anniversary year.

However, though we can’t be together in person, we’re excited to bring the sector together virtually in 2021 for CEP’s 20th Anniversary Virtual Learning Sessions, a series of events digging into the most pressing issues in this critical time. The first event in the series, “Taking Stock: Philanthropy’s Role in Supporting Racial Equity,” will take place January 27.

Amid an ongoing pandemic, widespread economic misery, and a national reckoning about structural racism, what is philanthropy’s role in supporting the movement for racial justice? Has the broader conversation about race helped to move philanthropy towards more equitable giving practices? What are the key opportunities and challenges of this moment for foundations and donors that seek to give to support racial equity?

Following a recorded reading from spoken word poet Micah Bournes to kick off the event, join us for an engaging conversation that will dig into these urgent questions. Our lineup of speakers includes:

Moderated by CEP’s Grace Chiang Nicolette, this conversation will take stock of where philanthropy is and where it needs to be to ensure that all communities of color can reach their full potential.

We’re grateful to the Walton Family Foundation, Archstone Foundation, and New Hampshire Charitable Foundation for sponsoring these sessions. We are currently seeking additional sponsorship for this dynamic series.  Please reach out to Nicolette at gracen@cep.org to learn more.

We hope you’ll join us — and also help spread the word to your colleagues, trustees, grantees, and friends!

Your Guide to Giving Season: The complete first season of CEP’s Giving Done Right podcast is out now! 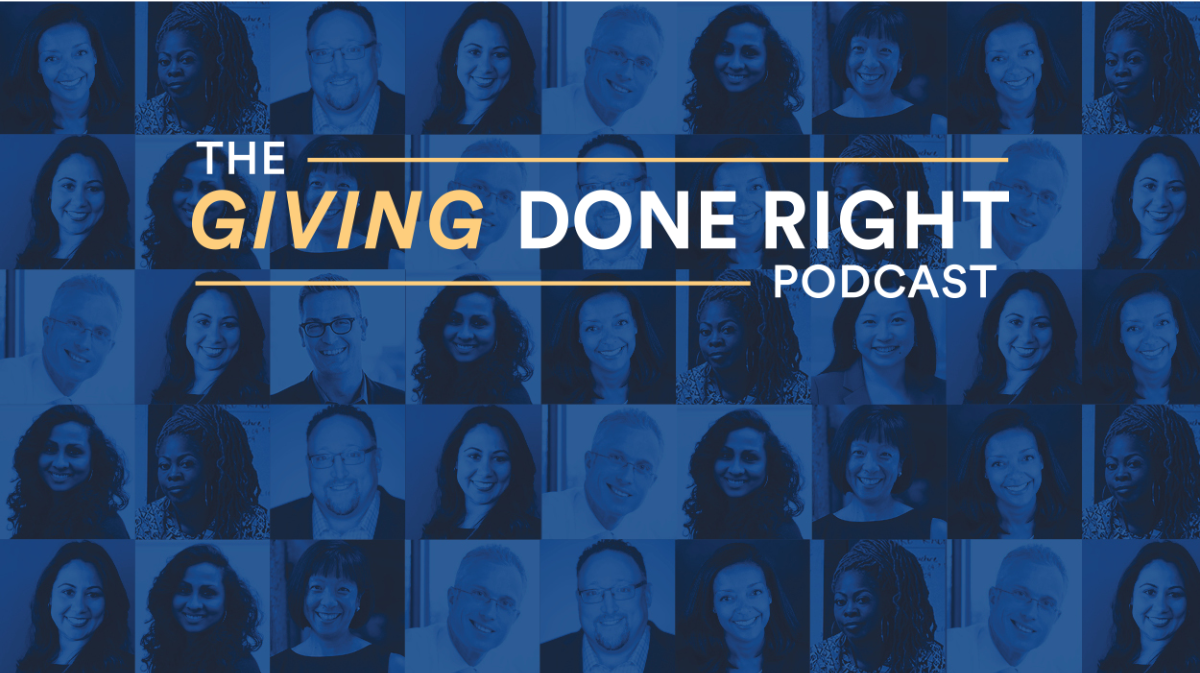 Like everything else, the holidays are different this year. And as nonprofits face increased demand for their services alongside simultaneous decreases in revenue, giving season is more vital than ever in 2020.

If you’re thinking about how you can be most effective in your year-end giving, CEP’s Giving Done Right podcast can be a helpful resource to you — and the complete first season is available for listening now.

Even though many of us won’t have our usual road trips and long flights this time of year that present prime podcast-binging hours, every episode features guests whose insights can help guide you in navigating how to make the greatest impact with your charitable giving as the end of the year draws near:

Short on time? For some quick snippets of wisdom, check out a short blog post from co-host Grace Nicolette in which she shares each guest’s response to a question posed at the end of every episode: “Giving done right to me is about (fill in the blank).”  Here’s what Season 1’s guests said.

Have you made your #PlanToListen in 2021? 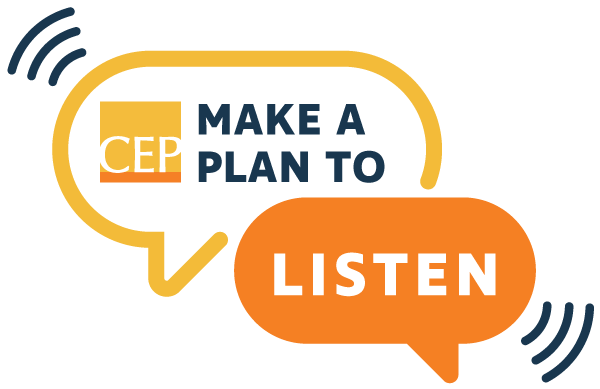 With the end of the year approaching, the key question for funders now is: how do we change and adapt our work in 2021 so we can most effectively support our grantees in a uniquely challenging time?

It’s more important than ever to make a #PlanToListen to stakeholders — carefully, regularly, and comprehensively — to rise to the challenge and be truly effective in your work in 2021. CEP’s assessments, including the Grantee Perception Report (GPR), can help.

More than 65 funders partnered with CEP this year to prioritize feedback and assess their effectiveness in a critical moment. 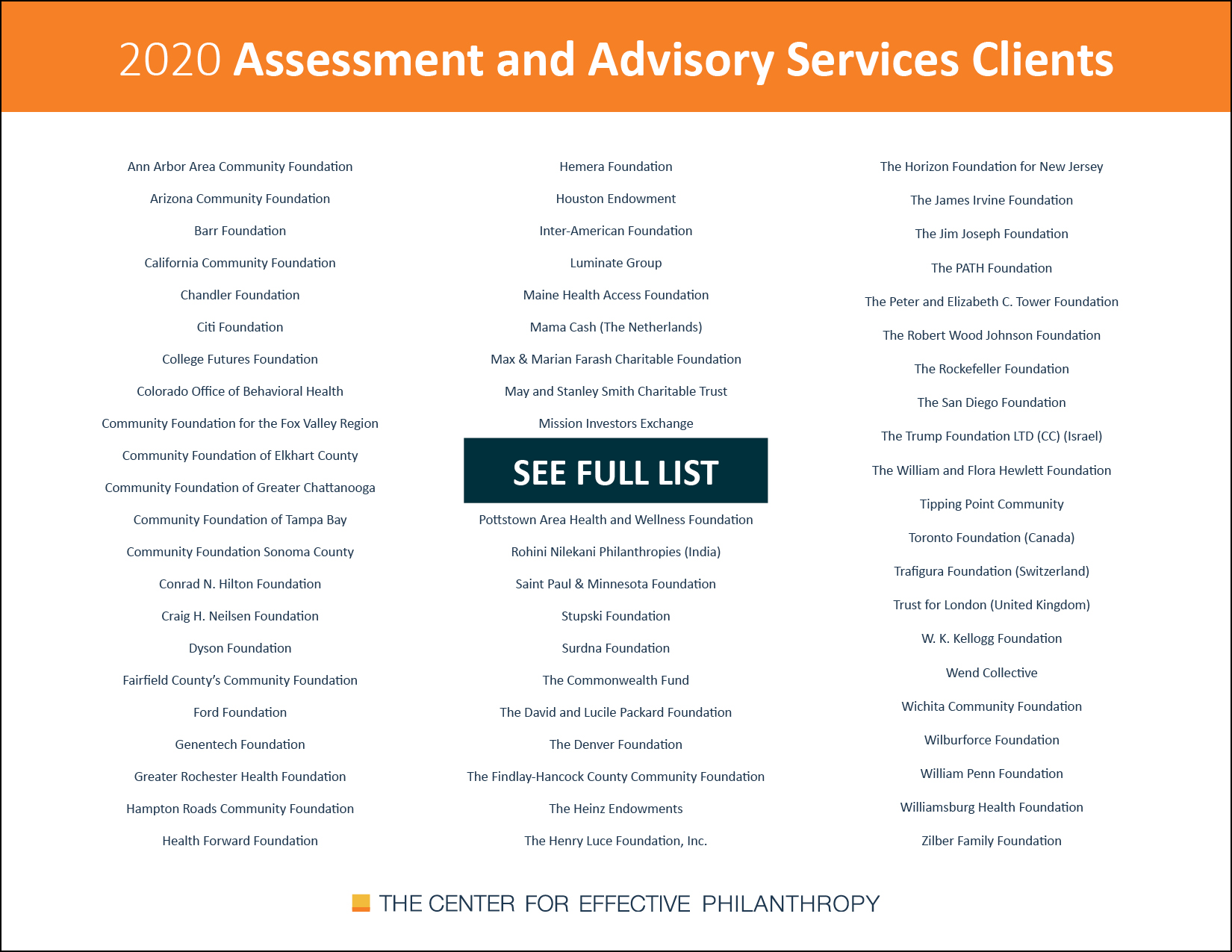 The Denver Foundation is one funder that used robust grantee feedback, collected through the GPR, to inform its work in this unprecedented time. Last month, CEP’s Austin Long talked with the Foundation’s Vice President of Community Impact Dace West about their experience of learning and implementing changes in practice through the GPR. Watch a recording of the conversation here.

If you’d like to learn more about joining this cadre of funders and centering listening in how you adapt your work in 2021, contact CEP’s Austin Long.

Girls Inc. President and CEO Stephanie Hull Elected to CEP Board of Directors 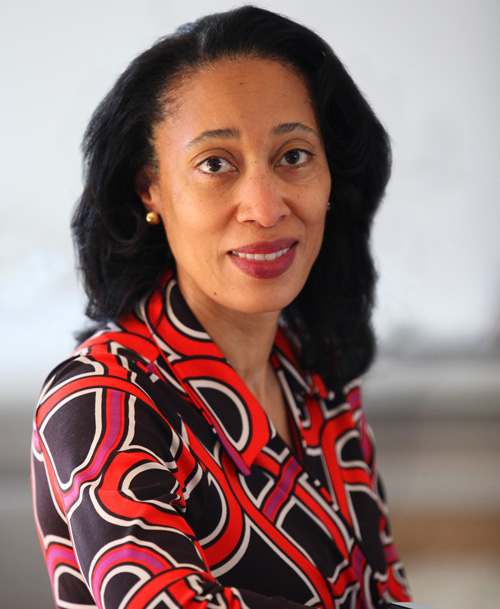 CEP was thrilled to announce earlier this month that Girls Inc. President and CEO Stephanie Hull was elected to join CEP’s Board of Directors. She’ll begin her three-year term on January 1, 2021.

Hull has a long career as a leader in education and as a women’s advocate. Since May 2019, she has led Girls Inc., a national nonprofit that provides programming to more than 134,000 girls across the U.S. and Canada and advocates for policy and culture change to improve the conditions in which all girls are growing up. Under Hull’s leadership, the Girls Inc. network has expanded into new high-need communities and developed new partnerships with schools to bring its proven programming experience to more girls, ensuring that they have the resources and opportunities to thrive.

“Stephanie has decades of experience in philanthropy and the nonprofit sector and a deep understanding of the challenges operating nonprofits face,” said CEP President Phil Buchanan in a press release. “She is among the wisest nonprofit leaders I have had the privilege to know and I am eager to work with her in the years ahead.”

“At this moment, the importance of best practice in philanthropy is more apparent than ever,” said Hull in the release. “Given the urgent and increasing calls upon funding entities to solve mounting challenges with finite dollars, it’s an honor to join this Board and crucial conversation.”

Please join us in welcoming Stephanie aboard!

Kate Gehling and Naomi Orensten, members of CEP’s research team behind the recent report, New Attitudes, Old Practices: The Provision of Multiyear General Operating Support, examine why the belief that assessing the impact of general operating support is uniquely hard is a myth.

And in a number of posts, guest authors also reacted to findings in the research:

Support CEP’s Work with a Grant, Individual Donation, or Sponsorship

You can also support CEP through sponsorship for specific CEP events and programs, including CEP’s 20th Anniversary Virtual Learning Sessions next year and Season 2 of the Giving Done Right podcast. Reach out to Grace Nicolette at gracen@cep.org to learn more about these exciting sponsorship opportunities.