This excerpt is from a book review originally appearing in the Fall 2017 issue of the Stanford Social Innovation Review. Putting Wealth to Work: Philanthropy for Today or Investing for Tomorrow? by Joel Fleishman is out today. 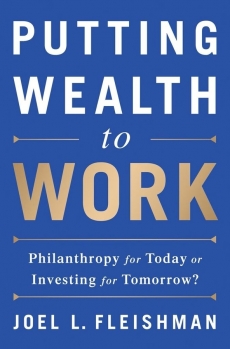 Perpetuity is so yesterday. Or so it sometimes seems, as many high-profile philanthropists make clear their intention to do their “giving while living,” rather than establish endowed, perpetual institutions. The once-multibillion-dollar Atlantic Philanthropies is in the final stages of winding down operations. The Bill & Melinda Gates Foundation plans to spend down within 20 years of its founders’ deaths. And donors such as Sean Parker (of Napster and Facebook fame) have announced that their foundations will be time-limited.

Parker has gone so far as to publicly deride perpetual organizations. “The executive directors of most major private foundations, endowments, and other nonprofit institutions are dedicated, first and foremost, to preserving the resources and reputations of the institutions they run,” he wrote in a 2015 Wall Street Journal essay. “This is achieved by creating layers of bureaucracy to oversee the resources of the institution and prevent it from taking on too much risk.” The best way to avoid “philanthropic decay,” Parker argued, is “spending down all of your philanthropic assets during your own lifetime.”

But in his persuasive new book, Putting Wealth to Work, Duke University’s Joel Fleishman, formerly an executive at the Atlantic Philanthropies, argues that Parker has it wrong. While limiting the life of a foundation sometimes makes sense, it should not be the default, any more than perpetuity should be.

Fleishman — who I should note played a key role as a funder and then board member in establishing the organization I lead, the Center for Effective Philanthropy (CEP) — challenges the central arguments for limiting the life of foundations.